Fossil
In geology, every rest or trace of an animal or vegetal organism, living in past or actual age, conserved into layers of earth crust. Traces and spoor left in sediments not yes solidified, as well as holes made by perforating animals, are to be considered fossils as well.

Urban fossil
Every product coming from human activity in contemporary cities, rests or traces of production and consumption, which remains “entrapped” in the asphalt, the “soil” of cities.

Urban fossils project have further been developed in collaboration with paleontologists and geologists Massimo Delfino, Francesca Lozar and Marco Giardino, from Scienze della Terra Department of the University of Turin.

It included a book with photo and essays from scientists and art curators, a travelling exhibition in science museums (starting from MUSE-Science Museum in Trento), a series of photo contests for the general public.
The book, produced by Natural Science Museum of Turin, have been deisgned by Paolo Berra. 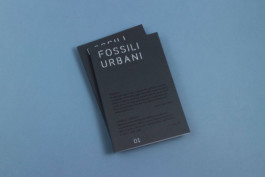